After my long loved Raspberry Pi died I needed a new way to update a dynamic DNS. I recently discovered the Invoke-WebRequest cmdlet that lets you send an HTTP(S) request and parse pretty much whatever you get in return. My use for this is to keep a site-to-site VPN to my lab up and running.

Save these files to somewhere that makes sense, for example C:\Scripts.

As always, ask if anything is unclear.

Yes! I have been looking forward to this one. In the following weeks I intend to publish a series of informative guides on Sophos UTM. My experience with XG is limited, but I have over five years of everyday configuration of the UTM.

My latest buy for the lab is a Sophos SG 330 which I plan to get working with a Home License. Lets see how it goes.

I have attached the brochures for anyone to see here, great read.

As I started to use the new setup, I realized more and more that I needed access to my lab (outside of plain rdp), especially with my laptop and phone. I tried several ways to solve this. Without any knowledge about the USG I had to try and error for some time before I found a reasonable solution.

The best option would be to make site-to-to IPsec to make use of all my old rules, but I could not get that working what ever I did. The USG still routed the traffic to the lab through wan and not through the tunnel. Anyway, next up was straight up static routes. Which is some what successful. 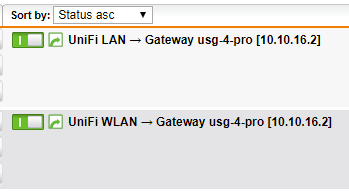 But, and this is a big one. Since the UniFi Controller does not expose any NAT rules in the UI there is no way (yes there is) to disable masquerading whenever an packet is leaving the wan interface. I have read by now that there are ways to manually add rules, but I feel that is for next time.

I read up on this article about how the firewall in the USG works (IN/OUT/LOCAL) and made all the necessary rules and finished with a deny rule for the rest. At the lab end there is simply an allow rule from the USG’s address. I found posts from Ubnt officials from back i 2017 saying NAT will be exposed in the Controller any time. We’ll see. For now this is OK.

Please feel free if there is anything I should do differently about this setup (or anything else).

Ever since IoT started to be a thing it has eaten up my IPs from the free 50 of the Sophos UTM Home license. Since I am currently some what invested in its features going away from the UTM is not an option at this time.

After some back and forth I decided to use an old trick – NAT. Simply put a new firewall behind a dedicated NIC on the UTM. Very few or non of my devices actually needs to talk to my lab, so all the traffic is then routed to WAN.

The UniFi controller is deployed on an Ubuntu 16.04 VM with this install script. The reason for 16.04 LTS is because that is the last version SCVMM 2012 R2 will recognize. I have successfully deployed 18.04 too, but it is not known to the VMM. 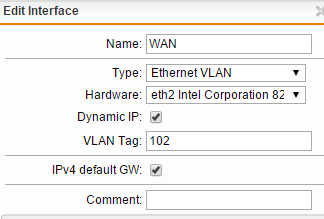 As I had to google this one for my self, I thought there could be one more article about configuring VLANs on Netgear switches. Multiple Virtual LANs will resolve how to move two or more separated networks to another room in your house with just one Ethernet cable. This could be LAN and WLAN, or in my case the two mentioned and TV over IP. The procedure is mostly the same on any switch with graphical user interface, but as I only own switches from Netgear the pictures will be from them.

First, define your VLAN identifiers. For my own documentation, I will use the one I use. You can basically use any number between 1 and 4093. For your consideration, I would use either 10, 11, 12 or 100, 101, 102 next time. To make things easy and not risk loosing connectivity, keep VLAN 1 and configure LAN on this ID.

The identifiers are also called tags. We have to tag the ports, or untag the ports. If we tag one port with more than one VLAN, it is called a trunk port. That is what we want between the storeroom and the living room.

Log in to your first switch and select Switching, VLAN. Insert new VLAN ID and new VLAN Name and hit Add. If there is a choice, select Static as VLAN Type.

When this is repeated for all the wanted VLANs on both switches, we are ready to move on to the tagging.

In the same menu, click on Advanced and VLAN Membership.

For reference, my VLAN 1 looks like this. As you can see, port 10 and 24 is used as trunk ports. Where port 10 is uplink to the firewall and port 24 is going to the other switch in the living room. All the untagged ports behave just as a normal port.

The other rules I have set is;

If you are using a router without VLAN support, just plug that in to any untagged port and use only tagged ports between the two switches.

On a side note. It is not necessary in all cases, but you can assign and prioritize untagged ports in Port PVID Configuration. I had to set PVID Configured on Port 23 to 5 to get the TV to work.

When the first switch is done. Log in to your other switch and open the same menu.

Tag the port from the other switch and untag all the others you want as LAN. As for the ports that has no T or U, they are assigned to WLAN and port 15 to TV, which are all untagged for the purpose. Here too I had to use the PVID Configuration to prioritize VLAN 4 and 5 on some ports.

You should now have a working set of VLANs.

Please give me feedback if something is unclear.